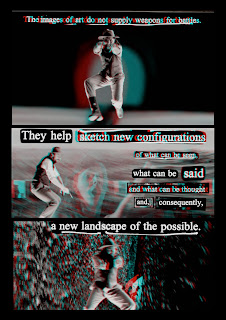 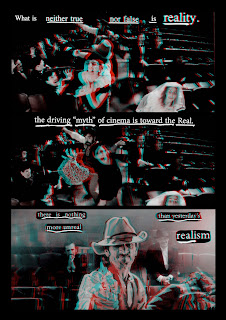 Posted by KinoReporter at 9:39 AM No comments: 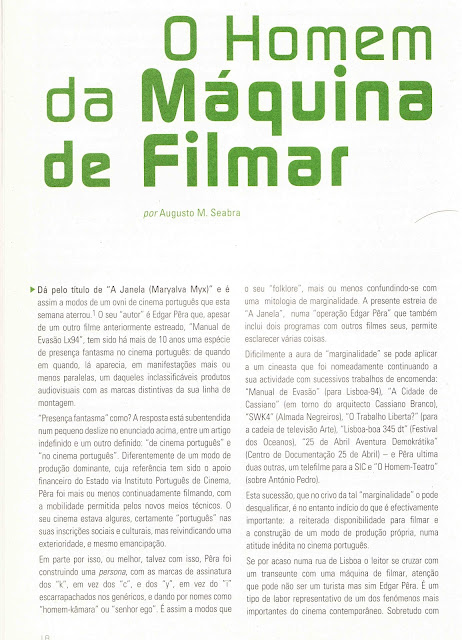 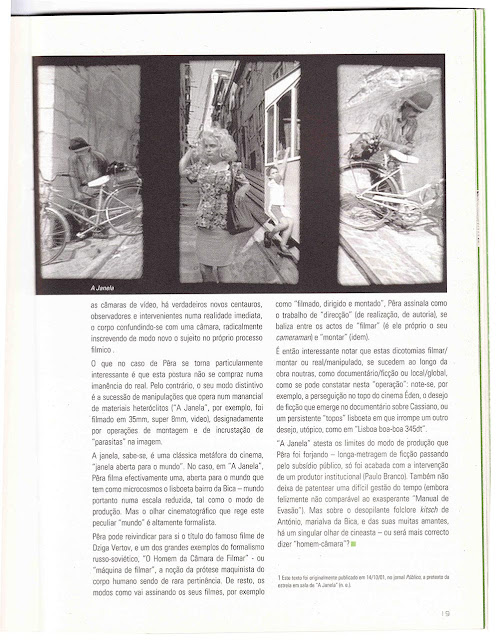 Posted by KinoReporter at 8:23 AM No comments:


I Am the Spirit of Constant Denial 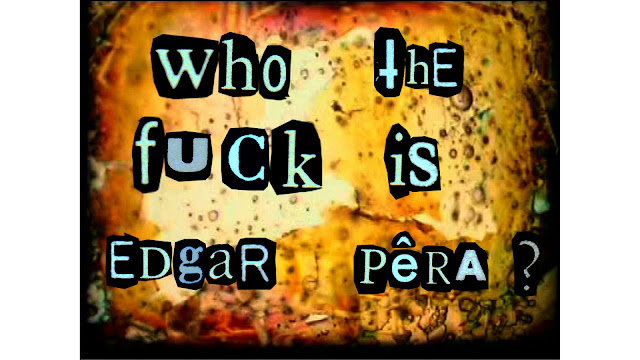 KINO-NEWS had a free pass to the Neuro-Lab Studio where Cinesapiens is being finished by a very small and very dedicated team. According to one of his close collaborators, Edgar Pêra used “irony and farce as the fuel. Cinesapiens is an astonishing motor of ideas. Everything is both atraccionistic and eccentricionistic: actors, musicians, dancers, they all play to the audience, and the audience plays for us.” But the filmmaker warned “ that’s just one of the ways to look at Cinesapiens.  But I agree that it’s a new take on the cinema of the attractions using 3D as the catalyst for kino-novelty”.
KINO-NEWS: Cinesapiens  will be shown together with 2 other films by Jean-Luc Godard and Peter Greenaway in the feature 3X3D. How did the project begin?
PÊRA: Four years ago Rodrigo Areias invited me to participate in the Guimarães Capital of Cultura 2012 movie program that you was starting to coordinate. I suggested that we did something in 3D.  I am very fond of the possibilities of this new technology, and still starting to learn. It’s another way of looking at cinema and there’s still a 3D Citizen Kane to be done. Welles used the wide angle to re-invent the language of cinema, there’s still lots of exploring before we understand the full capacity of the tridimensional illusion. Of course the glasses are a vey annoying detail that has to be dealt before the 3D revolution can really happen.
KINO-NEWS: What do you think of the contemporary 3D cinema?
PÊRA: Hollywood rules in 3D Land. The New Wave of 3D Euro-films is still a utopia. Probably it will never happen. Cinesapiens  surfs in this tridimensional void.
KINO-NEWS: What is the relationship between your films for Lisbon 1994 and Guimarães 2012? They were both commissioned by European Capitals of Culture.
PÊRA:  Manual of Evasion LX94 and Cinesapiens have many connections. Both films deal with the concept of Novelty. Manual of Evasion deals with Novelty in Time and Cinesapiens with Novelty in Cinema. Manual of Evasion used the ideas of Terence Mckenna, Rudy Rucker and Robert Anton Wilson about time. Cinesapiens is a micro-fragmented story of the cinema spectator. It has many kino-quotes and influences.
KINO-NEWS: Yes, we’ve noticed. We found in Cinesapiens references and quotes from Buñuel, Dali, Monty Python, Jean Louis Schefer, Lumière, Raymond Bellour, Serge Daney, Edwin S. Porter, Eliot Weinberger, Jacques Dèrrida, Bruce Isaacs, The Jazz Singer, Al Jolson, Marcel Collet, António Lopes Ribeiro, Rudolfo Valentino, Ana Steese Richardson, Legion of Decency, Jaques Rancière, Jean-Luc Godard, Santana, Singing In The Rain, Tom Gunning, Mel Brooks, Sidney Lumet, Bee Gees, Saturday Night Fever, Henry Jenkins, Elvis Presley, Rocky Horror Picture Show, Miroir du Cinema, Laura Mulvey, Vincent Price, Roger Corman, Bela Lugosi, Ed Wood Jr., Milos Forman, Wizard of Oz, Tom Waits, Bernard Herrman, Psycho, Bob Dylan, George Lucas, They Live, Videodrome, Woody Allen, John Williams, Jaws, Forbidden Planet, Joker, James Cagney, White Heat…
PÊRA: You have a very perceptive mind… You almost spotted everyone. And of course Jack Kirby and Ray Zone. And an excerpt from the short story “From Beyond” by Howard Phillips Lovecraft.
KINO-NEWS: Aren’t you afraid of losing your identity in the midst of a sea of cine-references?
PÊRA: Well, that was the challenge: to create a Kino-Frankenstein’s Monster, a new form of cine-life, but with conscience of itself. When the Kino-Frankensteins ’monster  looks into the mirror, which is the screen, he sees a condensed reflection of Cine-History. So I created various levels of narrative, frames within frames and genres within genres. A kinetic bridge between a kino-essay and a cine-novel. There is one quote concerning Godard by Jacques Rancière which I particularly like: “Cinema has betrayed its vocation by sacrificing the fraternity of metaphors to the business of stories.”  But the kino-quotes don’t necessarily reflect my point of view. The words and films were kino-canibalized, i.e. they were enslaved by the Cinesapiens creature.  The screenplay uses the kino-quotes as catalysts for the scenes.
KINO-NEWS: Did you write a script for Cinesapiens?
PÊRA: Yes, I did, and sometimes I regret that I did it. (Pêra smiles)
KINO-NEWS (puzzled):  Why?
PÊRA: Because I had to follow orders from my own past, and I would like to edit the film in total freedom. But one of the advantages of writing a screenplay for  Cinesapiens, is that I had a direction and still I had liberty to shoot what I wanted to. So, before choosing the kino-quotes I wrote a text about Amazement in the history of cinema, from the Early Spectator to the Holocinema Viewer, establishing a bridge between kino-theory and film-practice.

KINO-NEWS: You worked with the same artistic team of The Baron in Cinesapiens. Actors, musicians and even some technicians.  Why, if they are two complete different films?
PÊRA: Well, when I finish shooting a movie I always say: “now I am really ready to start shooting this film”. If you stay with the same people you tend to use what you’ve learned in the past and at the same time there is the common will to do something completely different.
KINO-NEWS: One last question about 3X3D: How do you feel between Godard and Greenaway?
PÊRA (smiling, and a bit ashamed): Like crashing into a party. Greenaway is a painter of moving images, a cine-architect. And it’s true that there’s cinema before and after Godard: today he is ubiquitous. I still have a very strong teenager-memory of Numéro Deux, of the way Godard treated the screen, it was a turning point in my way of looking at cinema.  But I’m not relevant to the equation. I’m just a kino-trickster who likes to play with images and sounds. I only tried to be faithful to my cine-identity. I’m not in the same department of G & G.
KINO-NEWS: But the Worldwide Celluloid Massacre ranks you among them in the “Eccentric Europe section”.  Zev Toledano even prefers Manual of Evasion LX94 to The Baron.

PÊRA: That guy must be more lunatic than I am. That’s one exception that confirms the rule. I’ve always lived outside the kino-radar. With 3X3D it’s the first time I have an international distributor. I’m cine-invisible.
KINO-NEWS: Do you agree with Olaf Moller when he said that you’re unknown because too different from what’s made in Portugal…He also says …
(PÊRA interrupts the Kino-News Reporter afraid that he will start proselytizing) PÊRA: Olaf Moller is another exception. He is the Krypto-Indiana Jones of lost cinematographies. He is also a text-maker, i.e. a filmmaker with words, who else could have said that I am a communist football player in a parallel universe?
KINO-NEWS: So the question still remains, sir: Who the Fuck is Edgar Pêra ?!?
PÊRA: Yes. You are correct again, young man. I must give you some autographed blu-rays of my films. When someone will publish them, of course.


Posted by KinoReporter at 10:17 AM No comments: